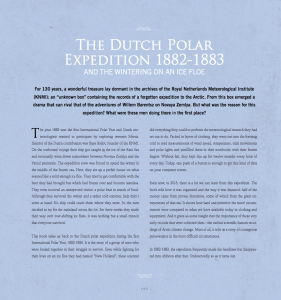 The year 1882 was the first International Polar Year and Dutch meteorologists wanted to participate by exploring western Siberia. Initiator of the Dutch contribution was Buys
Ballot, founder of the KNMI. On the outbound voyage their ship got caught in the ice of the Kara Sea and eventually went down somewhere between Novaya Zemlya and the Yamal peninsula. The expedition crew was forced to

spend the winter in the middle of the frozen sea. Here, they set up a prefab house on what seemed like a solid enough ice floe. They tried to get comfortable with the beer they had brought which had frozen over and become tasteless. They even received an unexpected visitor: a polar bear in search of food. Although they survived the winter and a rather cold summer, help didn’t seem at had. No ship could reach them where they were. So the men decided to try for the mainland across the ice. For three weeks they made their way over ever-shifting ice foes. It was nothing but a small miracle that everyone survived.

This book takes us back to the Dutch polar expedition during the first International Polar Year , 1882-1883. It is the story of a group of men who were bound together in their struggle to survive. Even while fighting for their lives on an ice floe they had name “New Holland”, these scientists did everything they could to perform the meteorological research they had set out to do. Packed in layers of clothing, they went out into the freezing cold to read measurements of wind speed, temperature, tidal movements and polar lights and pencilled them in their notebooks with their frozen fingers. Without fail, they kept this up for twelve months every hour of every day. Today, one push of a button is enough to get this kind of data on your computer screen.

Even now in 2013, there is a lot we can learn from this expedition. The book tells how it was organized and the way it was financed: half of the money came from private donations (a kind of crowd-funding avant la lettre), some of which from great entrepreneurs of that era. It shows how hard and primitive the travel circumstances were compared to what we have available today in clothing and equipment. And it gives us some insight into the importance of these very early records that were collected then – the earliest scientific human recordings of Arctic climate change. Most of all, it tells us a story of courageous perseverance in the most difficult circumstances.

In 1882-1883, the expedition frequently made the headlines but disappeared into oblivion after that. Undeservedly so as it turn out.